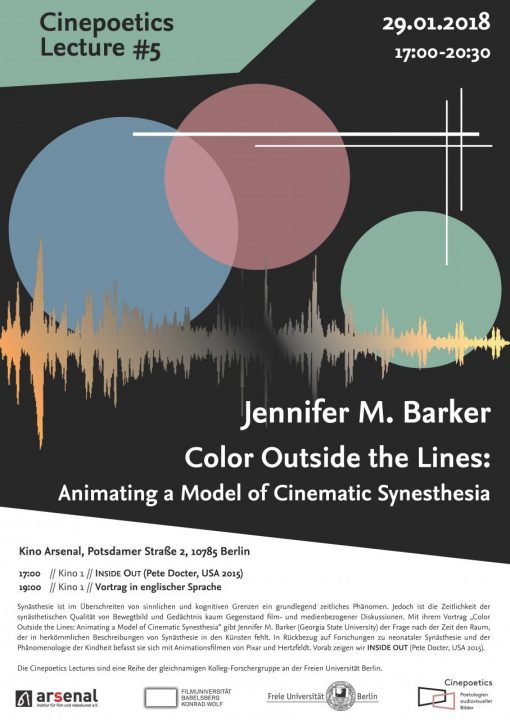 The Cinepoetics Center for Advanced Film Studies in Berlin welcomes fellow Dr. Jennifer Barker as guest lecture at its Cinepoetics Lecture #5 on January 29th. In her lecture “Color Outside the Lines: Animating a Model of Cinematic Synesthesia”, Jennifer M. Barker (Georgia State University) focuses on animation films from Pixar and Don Hertzfeldt, and draws on research into neonatal synesthesia and the phenomenology of childhood in order to show that conventional descriptions of synesthesia within the arts have given too little space to the question of time.

Dr. Jennifer M. Barker is the director of the Graduate Studies for the Moving Image Studies’ doctoral program and of the Film, Video, and Digital Image masters program. Dr. Barker researches in the area of moving image studies, with particular interests in cinema and the senses, synaesthesia, theories of spectatorship and embodiment, performance, feminism, as well as documentary.

In 2009, Dr. Barker published The Tactile Eye. Touch and the Cinematic Experience, which discusses the sensuous exchange between film and viewer and was a finalist for the “Best Book on Moving Image Studies” prize that year. Her work also appears in Cinema Journal, Discourse, Film-Philosophy, New Review of Film & Television Studies, Paragraph, Screen.